MAP02: Nullth Precinct is the second map of Community Chest. It is set inside of and around a demon-infested police station. It was designed by Thomas van der Velden. 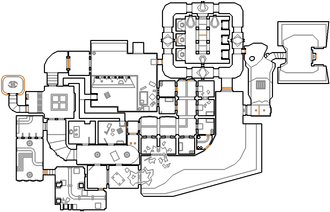 Map of Nullth Precinct
Letters in italics refer to marked spots on the map. Sector, thing, and linedef numbers in boldface are secrets which count toward the end-of-level tally.

Climb onto the roof using the dumpster and miscellaneous junk around. Enter the ventilation shaft, and take the southern path. Enter the hallway, and go up the stairs to the lobby. Flip the switch behind the desk, and go through the western doorway to your south into the shooting range. Climb through any of the openings, and open the southeast door. Grab the blue key from the open box in the south of the storage room. Open the next door, and then open the blue bars in the northeast. Take the lift, and go through the cell block to the switch. Flip it, and leave the building through the hole from either the first or second southern cells from the west. Go northeast, and open the northern door. Go around the hall and through the northern doorway. Enter the middle cubicle to the west, and press the switch. Enter the central box at the east, and flip the switch. Return to the outside, and approach the eastern door; you will be lowered into a tunnel. Walk up the rocky stairway, and press on the eastern door.