MAP02: Outskirts is the second map of STRAIN. It was designed by Björn Hermans and uses the music track "The Hell 'Prince' Medley" by David Shaw. It consists of an elaborate fort that keeps changing its layout as the player progresses through it. 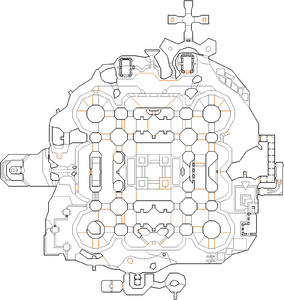 Map of Outskirts
Letters in italics refer to marked spots on the map. Sector numbers in boldface are secrets which count toward the end-of-level tally.

The soul sphere on the exit is not accessible due to the exit lines around it, meaning that 100% items is impossible on this map.

* The vertex count without the effect of node building is 1989.