MAP02: Plant is the second level of most console versions of Doom, based, as a renamed level, on E1M2: Nuclear Plant with modifications made to accommodate consoles' framerate and storage capacity limitations. The author of the conversion is American McGee, and the original author of the map is John Romero. 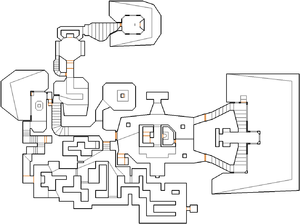 Map of Plant
Letters in italics refer to marked spots on the map. Sector, thing, and linedef numbers in boldface are secrets which count toward the end-of-level tally.

The level is not far different from PC version except texture theme design. Technically, the geometry remains very similar.

You start in a large room with a structure in the center and three doors in the west and the east of the room. The western door requires red key, so you cannot proceed but the other two doors on the east side do not require keys. Use any of them and they will lead you to stairs. Ascend the stairs to a room at the top. Knock off everyone here and grab the keycard. Backtrack to the starting room.

As explained above, the door at the west of the starting room requires the red keycard, which you already possess. Open it to reveal a long corridor spanning a nukage room to the right (north) and another staircase (west). Go up on the stairs that will lead you to another nukage room. Carefully walk on the ledge to not being hurt by nukage, at the same time collecting health bonuses. Use the lift to go down (note: secret#6 is found here). Knock off the enemies and flip the switch in the room. This will open two passageways to the left and to the right. Both lead to one place but the one to the right is the fastest. Once you will be in a staircase room go toward the seen exit door. Kill the enemies here and flip the switch to finish the level.

If it is the pistol start you can still obtain shotgun and armor. Enter the structure at the center of the level and go to a room to the left. Use the lift, on hard skill level fight an imp and take the shotgun and ammo for it (depending on the skill level, it may be either box of shells or 4 shotgun shells). Now, go back into the central structure and move to the north of the room (opposite to the starting point). You will discover an opening and a green armor lying at the right corner. If you are playing Sony PlayStation or Sega Saturn ports and your chosen skill level is high, you can even obtain a chaingun right in this room without visiting secret#2. Kill a chaingunner and take his gun.

Once you found the red key, open the red door in the starting area. In the long corridor head to the right (north) and you will enter a nukage hall. Quickly step on the central ledge and go behind the pillar. Search for a switch on this pillar and flip it. Go back to the corridor near the door you entered and you will see an area open. This is meant to be the maze. Explore it for enemies to kill, items to collect and secrets #3 and #4 as well (though, it may appear too dark in some console versions).

* The vertex count without the effect of node building is 738.