MAP02: Postal Blowfish is the second level of the first episode of Back to Saturn X. It was designed by Kim Bach (Torn) and Sarah Mancuso (esselfortium), the latter of whom composed the level's music track, entitled "Phobophobe". The par time is 2:30. In the official add-on version, this level's name is Mortar Cavalry. 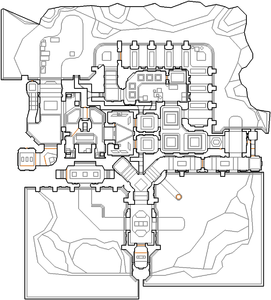 Map of Postal Blowfish
Letters in italics refer to marked spots on the map. Sector, thing, and linedef numbers in boldface are secrets which count toward the end-of-level tally.

Open the door in front of you to confront some zombiemen and shotgun guys, then head forward up some steps to a fork and take the right-hand (east) path to get to another door. Open the door and kill an arachnotron waiting behind it, then go forward until you reach a doorway on your left that has one or two chaingunners waiting behind it; there is a button on the east wall that will lower the floor and take you down to a room with several zombies and one or more Hell knights, as well as a rocket launcher. Go through the doorway in the north-east corner, then fight your way past imps, revenants and arachnotrons to a door; do not stand still after opening it as one or two mancubi are waiting ahead on an overhead ledge. Head up the nearby staircase and dispose of one or two revenants waiting at the top, then open the narrow door here to find the red keycard.

Drop down to the storeroom below (there is a super shotgun here on I'm Too Young To Die and Hey Not Too Rough skill levels), then go back into the previous room and open either of the red key doors in the west wall to confront some zombies (plus spectres on Hurt Me Plenty or higher). Press the button on the north pillar to lower a lift, ride it up and dispose of any imps and zombies waiting at the top before heading to the west side of the room; a wall will lower, revealing a mancubus, some zombiemen and more imps. Go through and head north to get outside to the ledge where you saw the earlier mancubi, then push past a revenant to find the yellow keycard at the end of that ledge. With the yellow key, head south until you reach a sealed door then turn round to see some steps leading up to a panel with "LOCK" written on it; pressing this will open that door, revealing a pack of cacodemons and lost souls blocking your way to the exit switch. Use caution as some of them will teleport behind you.

As the level starts you will see walkways going east and west. Take the west walkway to find an armor, then continue on to a room containing a rocket launcher; taking it will release a couple of imps and a knight, so step back before firing.

* The vertex count without the effect of node building is 2745.