MAP02: Punchline is the second map of Scythe. It was designed by Erik Alm and uses the music track "The Imp's Song" from Doom. The map is based around the idea of punching enemies while under effects of a berserk pack. 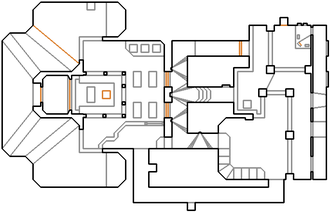 Map of Punchline
Letters in italics refer to marked spots on the map. Sector numbers in boldface are secrets which count toward the end-of-level tally.

From the start, head straight east and go through one of the two doors. Grab the yellow key (grabbing the berserk pack will release a group of demons), and exit the room through the way you came in. Head north in the main corridor and then east to the yellow door. Pass through this area by heading west until you reach a U-turn. Run down this corridor to the end and turn the corner to find the exit switch.

* The vertex count without the effect of node building is 479.