MAP02: Return to the Darkening (Claustrophobia 1024)

MAP02: Return to the Darkening is the second map of Claustrophobia 1024. It was designed by Chris Harriman (Impboy), with edits by Walter Confalonieri (daimon), Joonas Äijälä (Jodwin), and Brett Harrell (Mechadon), and uses "Nothing to Brag About" by Mark Klem, originally the music track from GothicDM 2 MAP12. 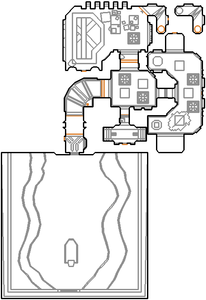 Map of Return to the Darkening
Letters in italics refer to marked spots on the map. Sector, thing, and linedef numbers in boldface are secrets which count toward the end-of-level tally.

* The vertex count without the effect of node building is 1520.