MAP02: Rings is the second map of The Enigma Episode. It was designed by Jim Flynn and uses the music track " ". 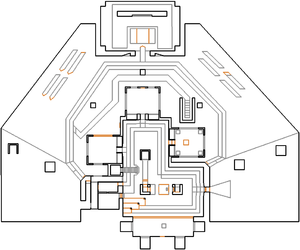 Map of Rings
Letters in italics refer to marked spots on the map. Sector, thing, and linedef numbers in boldface are secrets which count toward the end-of-level tally.

This map has an unorthodox and disjointed progression, with poorly marked puzzles and secret walls, so pay attention to the sounds and press as many walls as you can. Do note: You can finish this map in under a few seconds using the bug found below, but if you are aiming to fully completing it, then keep reading. You start the map between two walls, side by side surrounded by enemies. To your left, go up the second platform so that you are on the second level. Now, use the height to jump to the next concrete ring, pointing north. At the bottom you will see a red room, inside is a switch that you must press. Once you do that, go back and do not go down or up a level. Follow the path and you will notice that one of the rusty towers to the east has descended. This will open the way for you. Follow the path straight ahead.

You will come across some torches. Next to you is a tower with a switch inside. Go inside and press it. This will lower the second tower. Now go to the top of the map and level up and you can cross the new path. Go straight ahead until you reach the end. You cross a red room, where you can pick up armor, but this is not your goal. You should reach the end of the path, and just at the end take a right turn. You will be aiming for a secret wall. Enter the room and press the switch. This switch will lower the third and last tower.

Now go up to the last level and follow the clear path. Enter a red room with a psychedelic tower. The blue key will be revealed. Once you pick it up, go back along the path and you will see a new platform located in the central tower, right in front of the blue torch. The switch to activate the platform is located right in front of it. Press it and go up. At the top will be the blue door, even if it is not marked. The door will reveal the red key.

Now you can go back to the red door and go through. Go to the south end of the map, you will see a small path where there is a switch which lowers an elevator to the other side, to the left. Once you go up you will be in the first ring. Continue to the center until you reach the bridge and jump over the end edge. This will take you to the second ring. Now follow the east path to the bottom, where you will find a switch. Then repeat the process on the other side. Now, through the center, a small path will open up.

Once you go up the steps, go to the center of the area and you will see the last switch. Activate it. To your right, the wooden texture with blood on it, is actually an elevator. Once you are inside, several chaingunners and an archvile will attack you from the last ring on your right. Go up and press the switch in the middle, that will lower the last elevator in the middle of the map which takes you to the exit.

It is possible to complete this level in under two seconds by walking to directly below where the exit switch is and pressing 'use' (approximate coordinates -160,416).