MAP02: Rusty Rage is the second map of Alien Vendetta. It was designed by Anders Johnsen and built with DETH v4.16B. It uses the music track "I Sawed the Demons" from Doom. The par time defined in the executable is 1:50. 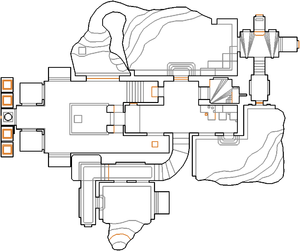 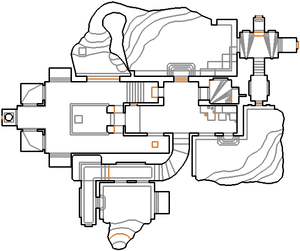 Map of Rusty Rage (second release), with additional "block monster" linedefs in the west of the map to prevent imps from wandering out of reach
Letters in italics refer to marked spots on the map. Sector, thing, and linedef numbers in boldface are secrets which count toward the end-of-level tally.

Go north, then east. Run into the northern room, and dash west. Jump into the nukage to the north, and grab the yellow key. Take the lift, and open the yellow door to the northeast. Head through the cave, climb the rocky stairs, and grab the red key. Backtrack through the yellow door, head outside to the southeast, and open the red door. Rush toward the switch at the north, and a barrier will lower in front of it; at the same time, a compartment filled with imps will open to the east. Flip the switch inside to open the barrier, and then trigger the northern switch.

To the east of the yellow door is an elevator. You can flip the switch nearby the entrance to the nukage area, and then run into the lift before it rises. Inside are a few crates, a stimpack, a chaingunner, and a super shotgun. Be careful as you climb onto where the super shotgun is, as a revenant will teleport in the lift immediately afterward.