MAP02: Sacrificium is the second map of Requiem. It was designed by Anthony Czerwonka and Florian Helmberger, and uses the music track "Rage" by Mark Klem.

You stumble upon a Small "Demonic" Cult...
its whereabouts... Unknown. 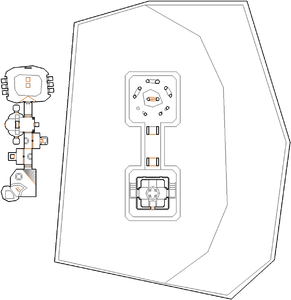 Map of Sacrificium
Letters in italics refer to marked spots on the map. Sector numbers in boldface are secrets which count toward the end-of-level tally.

Press the switch to lower the floor. Ignore the doors here and go to the barred teleporter. You can lower the bars directly by pressing the Use key on them. Beyond the teleporter, head downstairs either way and head towards the stone structures where five demons are. The one in the center is a teleporter back. When you are back at the previous area, hit the lion switch to lower the floor. Now go south, looking out for walls of imps that open up. The block that has the skull with blue eyes is a switch. Hit this switch to open the next door. In the next room, a cacodemon or a pain elemental will appear depending on your difficulty. Dispose of him and hit the switch to raise some stairs so you can return. Once back, use the lift and go across to the new hallway. You will see a red key on a platform over lava. Grab it and watch out for imps when you try to leave. Open the red bars and use the lift again, then go back across and open the red bars to your left to exit the map.

Due to the way in which the level's REJECT lump is composed, all of the deaf demons in sector 48 (the ground to and around the rock formation) are unable to see you, even if you are standing right in front of them, until they are attacked. Furthermore, all actors standing in this sector are immune to blast damage, which can be seen by giving yourself a rocket launcher using a cheat code, standing in front of a wall in this sector, and firing a rocket into the wall. Whether this was intentional or not is unknown.

In the red skull room, several plainly visible linedefs on the east side are marked as hidden for no apparent reason.

* The vertex count without the effect of node building is 866.