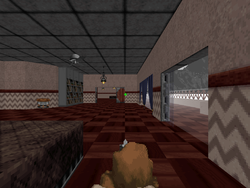 Juno's nap is interrupted by bad guys sneaking about.
This level occupies the map slot MAP02. For other maps which occupy this slot, see Category:MAP02.

Map02: Safe House is the second map of Midgard Outlaw, designed by Impie in 2017-2018 and constructed in Doom Builder 2.

While resting at Commander Dawn's safe house, Juno realizes a death squad has been let inside to finish her off.

The moment you fire a shot, every member of Dawn's death squad will come gunning for you. Grab the armor from the closet and beware any thugs who have already snuck into your room. You can then use the far-right door to enter the hallway and get the drop on your assassins, or sneak through the air vent next to your bed and into the next room.

The red key is downstairs in the parlor: it unlocks the kitchen gate control room upstairs. The moment you grab the yellow key, the windows explode and another death squad assaults the house, including Lancers on the hills beyond the outer fence. Go out through the yellow door (or through the broken windows) to enter the gallery: cross the bridge to reach the blue key, which silently releases a Lancer at the end of the hall and several Stepchildren behind you. Use the blue key to enter the security office and open the front gate, then go back outside and dash through it before the snipers can nail you. 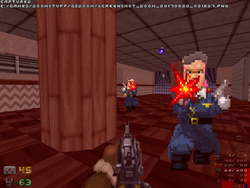 The twin Archangels guarding the security office can give you a run for your money: they're packing Mako cannons and dressed head to toe in Drogo's advanced armor, with shields that can block your shots. Save your Gungnir Rifle ammo for them, and try to nail them both with your Ballistic Knife at the start of the fight. There is very little cover in the office, so killing them as quickly as possible is a must.

The air vent in your bedroom has a secret section with extra weapons and a strategic view of the balcony and living room just outside.

After grabbing the yellow key, head to the southwest living room and go out the now open window to find a suit of blue armor.

Jump from the gallery bridge to the window on the right for a health pack. The balcony overlooking the front yard hides a Mako coilgun.