MAP02: Sanctum of the Wastes is the second map of Ancient Aliens. It was designed by Paul DeBruyne (skillsaw) and uses the music track "The Incessant Flow of Time," composed by Stuart Rynn (stewboy). The par time is 3:00. 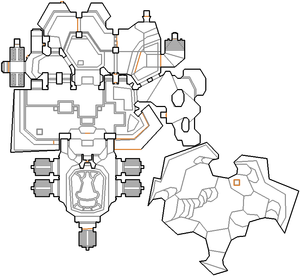 Map of Sanctum of the Wastes
Letters in italics refer to marked spots on the map. Sector, thing, and linedef numbers in boldface are secrets which count toward the end-of-level tally.

Begin by clearing out the immediate area of zombiemen, shotgunners, and imps. Move into the building in the north, and kill all of the enemies here too. Grabbing the berserk to the east will teleport in a revenant. Pressing the switch in the alcove to the west will drop walls with more shotgunners. One of these rooms contains the switch that lowers the elevator leading up to the fenced balcony.

Moving around to the stairs will drop a set of bars and reveal an ambush, featuring another revenant as well as more imps and shotgunners. A switch in their closet will raise the bars and allow you to continue up the stairs. At the top, more enemies will be waiting in the enclosed area as well as a chaingun. Moving outside, a switch to your right will raise a wall with chaingunners and the blue key. Grab the key, drop down, and use the switch near the start of the map.

This will drop you into a pit with some demons, imps, shotgunners, and a mancubus. Grab the rocket launcher and kill them all. The red key is on the other side of this arena. Grabbing it will drop walls with more shotgunners and revenants. Return to where you dropped and take the lift back up. In the alcove where the berserk was is a switch on the wall, which will open the door ahead with two more revenants, one teleporting behind you. Kill them, and take the teleporter to exit the level.

* The vertex count without the effect of node building is 1855.