MAP02: Secret Operation 2 is one of the two top-secret bonus levels of Memento Mori II. It was designed by Thomas Möller and uses the music track "Into the Fray" by David "Tolwyn" Shaw.

This map and MAP01: Secret Operation 1 are not included in the regular PWAD. To play them, the player must download the Memento Mori II infopack, rename the file MM2INFO.DAT to MM2INFO.WAD, and load it alongside MM2.WAD (and, optionally, MM2MUS.WAD). Some modern source ports can load the .DAT as a .WAD without any renaming needed. This map replaces MAP02: The Feeding Pit. 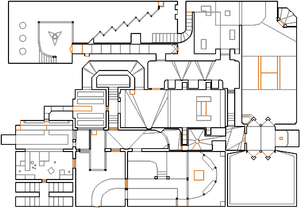 Map of Secret Operation 2
Letters in italics refer to marked spots on the map. Sector, thing, and linedef numbers in boldface are secrets which count toward the end-of-level tally.

* The vertex count without the effect of node building is 1191.