MAP02: Shuttle Bay is the second level of Icarus: Alien Vanguard, taking place just after the main character docks at the Icarus with the hyper-shuttle from the previous level. It was designed by John Minadeo and uses the music track "The Search" by David Shaw (Tolwyn). 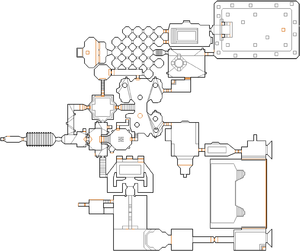 Map of Shuttle Bay
Letters in italics refer to marked spots on the map. Sector numbers in boldface are secrets which count toward the end-of-level tally.

From the entrance, head forward and left. You can go to a number of different places from this room. For now, head through the northern door. Ahead, you will see a bunch of octagonal rooms with monsters sneaking about. Go towards the one directly east of the hallway you are in, and then go all the way north. Then head east towards the door and open it. Head around the blue-floored area to the large metal room where you will see the yellow keycard at the far end. Grab it, but watch out as enemies appear from columns and on the balcony. Use the lift to go back up and then head left towards the switch and the door. Flip the switch and then open the door, then go straight west, up the lift and then down the stairs back to the octagonal rooms. Go straight west towards the berserk pack and open the walls with yellow borders around them to obtain the blue keycard. Head back into the room where you can go a number of places, and then take the northeast door. In the next room, there should be a teleporter in the northwest corner, so take it. When you emerge, go west all the way until you find a broken bridge. To build it, head down and to the left and up the stairs. You should see a door with blue borders on it, open it for a switch. Press it, then turn around and head up the stairs there for a switch that builds the bridge. Another switch will be revealed near the base of the bridge where you were, so use it to trigger a lift, ride it up, and then cross the bridge north. Head straight towards the blue-floored area with the computer panels, and notice that one of them says "RED ALERT". Press on the panel in front of it to trigger windows with zombiemen inside. Shoot through one of these windows and a door will open to the west. Follow it up to a passage with imps behind some bars. Press the switch in this room that is to the left to remove some of the bars. You can squeeze through these bars. Open the big door and the red key will be available so pick it up. After collecting it, go straight west towards the door that says "PLANET EXIT". Open it and press the panel furthest to the right to exit the map.

There are two rooms to the east of the starting point with lots of zombies and some minor supplies.

In the red key room, open the door to the north and follow the corridor to a switch. Leave the room and to the southwest is another switch. Hitting this switch will lower one set of bars in the room to the left of the red key room.

North of the room that has the teleporter, if you enter through the southern door, the middle silo will open containing a medikit and an armor bonus.

The elevator that makes up secret #1 cannot be activated from its northern side (linedef 523), as that side is where the switch that frees you from it is located. Use its other sides instead.

Like other Icarus levels with teleporter exits, you can do a suicide exit in the exit room. Monsters must be used for it, though, as none of the rocket launchers can be accessed in single-player. The easiest method is to make an imp two rooms from the exit follow you, and then kill you with a fireball as you charge at the barrier. If the timing is right, your body will slide under the barrier and into the teleporter to exit the level.

* The vertex count without the effect of node building is 1861.