MAP02: Slugfest is the second map of Community Chest 4. It was designed by Paul DeBruyne (skillsaw) and uses a MIDI of Sand Rock's theme from Gundam Wing: Endless Duel sequenced by cyahin. 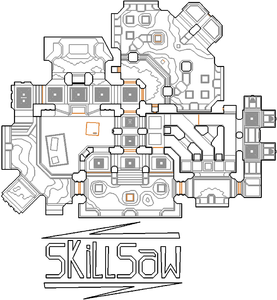 Map of Slugfest
Letters in italics refer to marked spots on the map. Sector, thing, and linedef numbers in boldface are secrets which count toward the end-of-level tally.

Go to the left dropoff from the starting point, take the blue key, go up the lift, go left, open the blue door.

Open the blue door at the starting point, open the red door behind the blue door, go straight, open door, step onto teleporter, press switch, take yellow key, wait a few seconds while the silver doors get opened, when they open go through them and flip the switch behind them, go in front of the left silver door and step upon the newly revealed teleporter, open yellow door and flip the switch behind it.

It's possible to press the switch from below the crate to reveal the second secret as a shortcut to not ride the lift again.

* The vertex count without the effect of node building is 3151.