MAP02: Somebody Set Up Us The Bomb (Mock 2: The Speed of Stupid)

MAP02: Somebody Set Up Us The Bomb is the second map of Mock 2: The Speed of Stupid. It was designed by Tom White (Hyena) and uses the music track "Berthed in Urine" by himself. 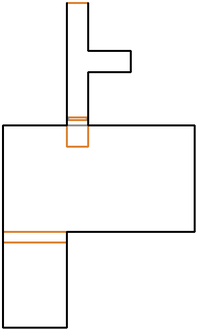 Map of Somebody Set Up Us The Bomb
Letters in italics refer to marked spots on the map. Sector, thing, and linedef numbers in boldface are secrets which count toward the end-of-level tally.

Lower the wall that is seen in front of you. You should see several chainsaws on top of the now-lowered wall. A cyberdemon guards the area. Pick up the extra goodies seen behind the cyberdemon, which includes a plasma rifle, soul spheres and multiple energy cell packs. Defeat the cyberdemon with any weapon of interest. Lower the elevator that is seen in the upper-middle of the room. Wait approximately two minutes for the elevator to be lowered. Get in the elevator and wait an extra two minutes. A collection of barons lies on the upper floor. Kill them with any weapon. Move to the end of the room, and flick the exit button to finish the level.

A rocket launcher can be found in the east alcove of the upper floor.

* The vertex count without the effect of node building is 23.