MAP02: Strange Outpost is the second map of Disrepair. It was designed by Andrea Rovenski (Cyberdemon531) and uses the music track "Smells like Burning Corpse" by Jonathan El-Bizri, Josh Martel, L.A. Sieben and Tom Mustaine (from TNT: Evilution). The par time defined in MAPINFO is 15 seconds. 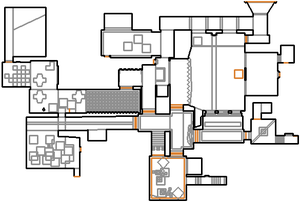 Map of Strange Outpost
Letters in italics refer to marked spots on the map. Sector numbers in boldface are secrets which count toward the end-of-level tally.

Dispatch of the Hell knight in the outdoor area to open up panels at either side of him. Avoid the monsters, hit the switch inside, and then take the teleporter to the upper area. Hit the switch up there, take the lift down, and hit the switch in the western-most door. These switches open the path to the red key, so collect it, and exit the level through the red door.

After opening the door in the first room, a small box raises up in the floor behind you. This allows you to run up the larger boxes, collect the red key, and bypass normal route.

* The vertex count without the effect of node building is 1535.