MAP02: Sunlight Source is the second map of Avactor. It was designed by Eradrop and uses the music track "". The par time defined in the DEHACKED lump is 30:00. 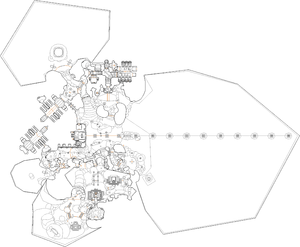 Map of Sunlight Source
Letters in italics refer to marked spots on the map. Sector, thing, and linedef numbers in boldface are secrets which count toward the end-of-level tally.

Head up the stairs to meet the new mechanical turret enemy. Take the middle elevator up to the temple exterior, and fight downstream to the watery courtyard. An opening to the northeast leads to a small fortress. Use the switch to raise the bridge across, then open the central door. Fight your way down the steps on the right and use a switch in one of the cells to lower the central columns, revealing a teleporter. Take the teleporter to a room with several switches and use them to open the rest of the fortress. Go back through the teleporter, up the stairs, and turn around to take the left branch of the fortress. Turn left at the intersection and exit the fortress.

Cross the bridge over the exit waterway and step on the floor-tile trigger to launch an ambush. Continue across the blood bridge, where another ambush awaits. Pressing the switch teleports you to a nearly-identical room. When you return to the blood room, the bridge falls, leaving you two paths--a dead-end containing a mega armor and the exit, both with crushers. Note this area cannot be re-entered, so if you want the armor you must collect it now.

The path emerges back at the side of the temple, and the bars downstream on the right have been drawn. Heading downstream triggers another ambush. Take the right passage to a columned courtyard fronting a temple. The switch lowers the bars at the temple steps (and triggers an ambush, of course). Attempting to climb the temple, however, causes the stairs to collapse, forcing you to detour through a western archway. After a rather straightforward climb, you end up in an alcove overlooking the back of the temple. Jump across and carefully proceed around the temple to the main steps. Head through the doorway, across the bridge, and into a cave where the yellow skull key malevolently awaits.

* The vertex count without the effect of node building is 16281.