MAP02: The Bridge is the second map of Memento Mori. It was designed by David Davidson, and uses the music track "Dreadnaught" by Mark Klem. 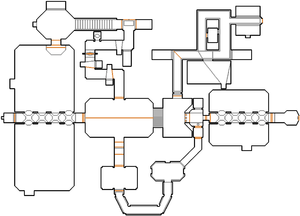 Map of The Bridge
Letters in italics refer to marked spots on the map. Sector, thing, and linedef numbers in boldface are secrets which count toward the end-of-level tally.

Collect the shotgun and box of shells, then open the door ahead to a platform. As you step on it, it instantly rises into a larger courtyard. In single player, this courtyard is empty. In cooperative, this leads into a five demon ambush. Head into the door ahead. One (Hey, not too rough and below), two (Hurt me plenty) or three (Ultra-Violence and above) will emerge.

This next area is a dark tunnel. Notice alcoves in the walls with lamps, projecting light on the opposite wall. Every time you cross the first two light beams, a trap will open opposite the light beam. The first contains an imp (Hey, not too rough and below) or a demon (Hurt me plenty and above). Collect the armor in the trap. The second one has a shotgun guy (Hey, not too rough and below), two imps (Hurt me plenty) or four imps (Ultra-Violence and above). Collect the 4 shotgun shells (and on co-op, a light amplification visor. Open the gate ahead and clear out any opposition (the third, flickering light beam is not a trap trigger).

At the end of the tunnel is a flickering rectangle of light. You can make out two switches on the wall. Only the left switch is mandatory - the right switch opens up a trap in the east with up to two demons, but contains a small ammo cache. Thus, flip the left switch (on co-op, three demons will be behind the door) and head up the stairs into an outdoor area.

This outdoor area contains four zombiemen (Hey, not too rough and below), or three imps and four shotgun guys. On multiplayer, there are two more demons on all difficulties. Monster infighting can be easily started here - use it to conserve ammunition.

Find the platform in the southern area and ride it down to a small overlook facing a bridge. Take the yellow key. On single-player, you are advised to head back up as quickly as possible. However, on co-op, there is a chaingun with two boxes of bullets. The player who picks it up should use it to snipe off the enemies on the bridge before heading back up.

When the lift goes back up, a trap will open with three zombiemen (Hey, not too rough and below), two demons (Hurt me plenty) or three demons (Ultra-Violence and above). Avoid being boxed in and finish them off.

Backtrack through the tunnels to the first courtyard. A trap will have opened with a demon (three on co-op) near the two switches, which should be no problem.

Go through the yellow door in the west of the courtyard. You are now on the bridge you saw earlier, with quite a fair bit of opposition (unless you cleared them out from the yellow key perch). Grab the blue key, megaarmor and if needed, stimpacks from the end of the bridge and backtrack to the first courtyard.

You are now in a water filled set of tunnels. Once you cross the right-angled corner, the door will seal shut behind you. On single-player, remain quiet and proceed to the doorway, where you can get the jump on some enemies. On Hey, not too rough and below, there is a megasphere in this room. However, on co-op, five extra spectres will spot any player as they attempt to sneak into that room, so instead make a noise. The enemies will be awakened and funnel themselves into a bloodbath.

There is an ammo cache in the middle of the tunnels, but entering it will activate two traps releasing six zombiemen (Hey, not too rough and below), four demons (Hurt me plenty) or six demons (Ultra-Violence and above) into the tunnels. Enter it only if you need health, ammo, or 100% kills.

Proceed to the northeast, where there is a corridor leading to a skull switch. Brace for a dangerous trap. When you flip the switch, the blue door that you used to enter will be unlocked, but two traps on either side will open, with six zombiemen (Hey, not too rough and below) or four shotgun guys and four imps (Hurt me plenty and above) in close quarters.

Grab the red key from the southern trap and backtrack to the small courtyard.

Raise the red bars in the east of the small courtyard. Continue through and kill the shotgun guys in alcoves on either side. Open the door ahead.

One last bridge's worth of enemies - three zombiemen (Hey, not too rough and below) or seven imps ((Hurt me plenty and above) - stands between you and the exit room. On co-op, there are three more demons on all difficulties. Clear them out and head for the door ahead.

Open the door and clear out any demons in the exit room, then flip the switch to end the level.

* The vertex count without the effect of node building is 808.