MAP02: The Burrow is the second map of Sunder. It was designed by Insane_Gazebo and uses the music track from MAP06 of TNT: Evilution. 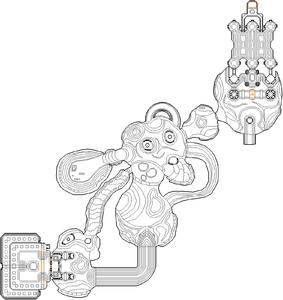 Map of The Burrow
Letters in italics refer to marked spots on the map. Sector numbers in boldface are secrets which count toward the end-of-level tally.

Pick up the shotgun and green armor, then fall down. An arch-vile is directly in front of you, with revenants and mancubi scattered at the sides. Your first goal is to the southeast, where you can climb the rocks to the super shotgun and switch. The switch lowers three rock walls. To the north is a batch of Hell knights, to the south is a large horde of demons, and to the east is a tunnel where you can fight chaingunners. Keep your supplies close by, especially when fighting off the hordes of demons.

When you are ready to proceed, the next destination is through the gaping mouth south from where the demons were. The rocket launcher is right there, and further into the mouth is a group of revenants. Past them, open the door to reach a brown room. Approaching the soul sphere reveals Hell knights on the upper floors, which you will have to get past. Take the south set of steps and press the switch here, then take the teleporter up the northern steps to be on the uppermost floor. There are two switches here, both of which will open the doors out of the brown room. Return to the previous area via the northeast passage to find arch-viles, imps, and a cyberdemon roaming about. Another cyberdemon is perched near where the first switch was, and you will need to get rid of this cyberdemon to access the next switch. This will open up the northeast area.

Grab the soul sphere here, but do not press the switch yet. The towers to the left and right will reveal two arch-viles; get rid of them before pressing the switch. Ready the rocket launcher once the switch is pressed as you will have to deal with revenants who will come pouring from inside. Some of them will be hiding in the left and right sections of the building, so you will have to flush them out until it is quiet. These two sections have switches which will open up the northern section of the building, where a berserk pack and the exit are located.

* The vertex count without the effect of node building is 5140.