MAP02: The Canal is the second map of Jenesis. It was designed by James Paddock (Jimmy) and uses the music track "River," composed by Stuart Rynn (stewboy). The par time is 2:30. 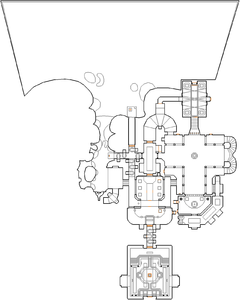 Map of The Canal
Letters in italics refer to marked spots on the map. Sector numbers in boldface are secrets which count toward the end-of-level tally.

Go down the stairs. Grab the shotgun and turn right. You'll come across an intersection overlooking a nukage area. There is an inaccessible door visible through the bars, flanked by two red torches. To your right is a set of bars, and to your left is a hallway. Enter the hallway, and directly in front of you is the blue locked door. When you approach an intersection, turn left and there should be a small opening with a switch. This switch lowers the bars mentioned near the start, enabling you to get to a door surrounded by nukage. Once there, ignore the yellow door and the bars near that door. The door opens to a hallway of mostly red torches (see Secret #1). The door at the end leads to a big room with a nukage fall on which is the yellow key. Flick the switch at the end of the room to lower a lift to the yellow key and grab it.

Go back outside that building and open the yellow locked door. Press the switch in there to raise a bridge to the other side of the canal. On the other side, follow the hallway to a balcony overlooking a cross-shaped water area. Find and press both switches on that balcony. A bridge should raise, enabling you to get to the previously mentioned inaccessible door. Go straight, there is a red locked door; because you can't access it yet, turn right and go down on a lift. You'll find yourself in the previously mentioned cross-shaped water area. Directly ahead of you some distance away there will be two stairways. Go to the left one first and press the switch, then go to the right stairway (the switch lowers a set of bars, enabling you to progress). Turn right and follow the hallway until you come across a drain. There, turn right and find yourself on a raised platform overlooking the red key, which is at the south end of the water area. Press the switch to lower it, and backtrack to grab it.

Go back to the red locked door and open it. Follow the hallway until you get to another balcony overlooking the water area. Press the switch there. The switch lowers the red bars outside, as well as a portion of the wall. Memorize the fireplace in the middle of the hallway, it will be important. Go back in the water to enter a red-carpeted area with the blue key. Once you grab the key, the pillars will lower, as well as a portion of the wall. Press the switch in the newly-opened alcove to lower another wall, and follow that path until you come back to the fireplace mentioned near the red locked door. Make your way back to the blue locked door near the start of the level. You'll come across a hallway with a meandering water pattern. Go straight and exit the level!

The data was last verified in its entirety on December 25, 2017.

* The vertex count without the effect of node building is 2233.