MAP02: The Catacombs (The Abyss) 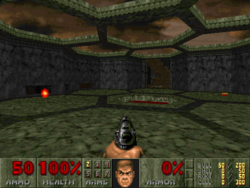 The honeycomb marble room of The Catacombs.

MAP02: The Catacombs is the second level of The Abyss. It was designed by Miklos de Rijk (H2SO4). This level teaches basic concepts of the non-linear, "spelunking" style that will be the majority of later levels, but in a simpler, more linear context.

"Push the dead player in the catacombs..."
― ABYSS.TXT [source] 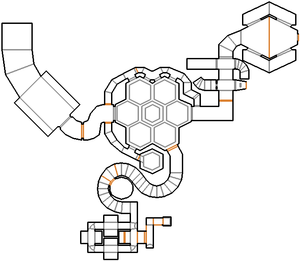 Map of The Catacombs
Letters in italics refer to marked spots on the map. Sector numbers in boldface are secrets which count toward the end-of-level tally.

At the start, grab the chainsaw and take out the demons ahead. Next, grab the shotgun and push the right angled wall in the honeycomb room. it should open to a set of descending stairs. go down these stairs to the catacombs, and use the platform with the dead player resting on it. Climb on the lowered platform and jump across to the other side, and use the wall to open a stone room with a lift. Activate it with the skull switch, ride it to the top, and press the switch next to you before teleporting.

After teleporting, hit the red X areas, the rightmost one first. Get the key from the grotto, and navigate to the next red X tunnel. You should exit the tunnel, beyond the blocking brick wall. Use the marble baron face, run through and hit the switch. Take out the imps and reach the exit switch behind you.

The unofficial secrets are in areas the player must access to complete the level, and are not listed here.

* The vertex count without the effect of node building is 510.