MAP02: The Compound is the second map Doom 2 the Way id Did. It was designed by Richard Frei (Tarnsman). The par time is 1:30.

This level contains a secret level to MAP33: Hexsoil, however it is only accessible with compatible source ports. 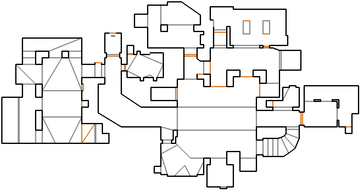 Map of The Compound
Letters in italics refer to marked spots on the map. Sector, thing, and linedef numbers in boldface are secrets which count toward the end-of-level tally.

Drop down to the water pit (A) and turn to the right. Go forth until you approach a lift. Press the gargoyle button to activate the lift. Now drop down, turn right and go through the tunnel (B). Proceed until you find a red keycard. You may rather use a teleporter pad located at the bottom of slime pool to get faster to the opposite side of the pool. Go back to the place you have dropped down (A) and open the red keyed door (C). Turn to the left and pass around the fencebar. Enter the teleporter pad. In the place where you have spawned enter the UAC door. Press the switch to the left and use a lowered lift. Go forth (D) and open the door to get to a computer room (E). Find another switch in this room. When pressing it three platforms will temporarily lower, one that's located right before you contains a blue keycard. Grab the keycard and leave the computer room. Drop down the ledge and again to the water pit (A). Go to the west and open the blue keyed door (F). Flip the switch to end this level.

Enter the room with the three tech lamps (see secret #1). Activate the fake switch that is located on the short wall segment in the northeast corner. If you are using a vanilla-compatible source port this will alternately behave like a normal exit or cause the same level to be restarted; otherwise, you will enter the easter egg secret level MAP33: Hexsoil.

* The vertex count without the effect of node building is 381.