MAP02: The Feeding Pit is the second level of Memento Mori II. It was designed by David Davidson and uses the music track "Into the Fray" by David Shaw.

This is simple. We need to get deeper into the planet, so get going and kill everything that moves. Should be a short trip. 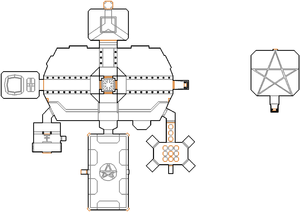 Map of The Feeding Pit
Letters in italics refer to marked spots on the map. Sector, thing, and linedef numbers in boldface are secrets which count toward the end-of-level tally.

Grab the shotgun and drop into the stone walkway. Head to the western room, stand on the cross on the floor, and climb through the hole. Head to the east and climb up the stairway of pillars to grab the red skull key. Be careful when you do this, as four cubbyholes will open to reveal either troopers (on Hey, Not Too Rough or lower) or sergeants (on Hurt Me Plenty or higher.) Climb back down and head to the red key door in the center of the walkway. Open it, head through the eastern door, and enter the portal at the end to be taken into a room filled with demons. Flip the switch and enter the next portal, grabbing the blue skull key in the process. Head to the blue key door in the west and approach the hole while taking care of the opposition. Wait for the pit of blood to rise, and then grab the yellow skull key. Open the yellow key door and enter the room; a troupe of former humans will suddenly appear in front of you. Take care of or go past them, and enter the hole to finish the level.

If you accidentally fall into the blood pits near the stone walkway at the beginning, enter the teleporters at either side to be taken back to the start of the level.

Likewise, if you accidentally fall into the blood pit in the red skull key room, press on any of the pillars and they will lower like elevators for you to ride back up.