MAP02: The Pain Labs (No Rest for the Living)

MAP02: The Pain Labs is the second map of No Rest for the Living. It was designed by Arya Iwakura and uses the music track "The Dave D. Taylor Blues". The par time is 1:45. 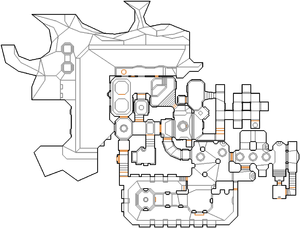 Map of The Pain Labs
Letters in italics refer to marked spots on the map. Sector, thing, and linedef numbers in boldface are secrets which count toward the end-of-level tally.

Go upstairs and go through the door to your right. Walk along until you reach the red key.

Backtrack to the first door and open the red door behind it. Walk along, open the door and take the blue key.

Take the blue door to the right of the blue key and go through it. Go right and push a switch that will lower a yellow key.

After taking the yellow key, backtrack to the blue door and open one of the two yellow doors nearby, walk along, open the exit door and flip the switch behind it.

There are twelve secrets on the map, in nine secret areas, some of which can be accessed from several places: