MAP02: The Scorpion is the second map of Erkattäññe. It was designed by Nicolas Monti and uses the MIDI-rendtion of track "Escapade" by Janet Jackson. 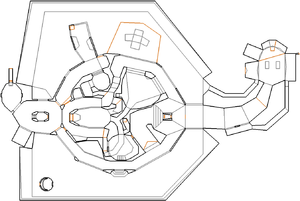 Map of The Scorpion
Letters in italics refer to marked spots on the map. Sector numbers in boldface are secrets which count toward the end-of-level tally.

Enter the main building and inside follow the corridor to the left until you find a door to open. Enter another door to the left, which is tan. In the next room go to the right and you will be able to take the blue keycard in the blue-floored room. Beware of the two traps behind, however.

Go to the eastern side of the building where a gap can be seen (to the right of the entrance of the building or via the north corridors). Enter inside the structure in the center of the room by opening the blue key bars and flip the switch to fill the gap by raising the bridge to the east side. Go to that side to eventually come to a room at the north east. Before you take the keycard, prepare to fight with enemies behind the outer walls of the room. Once you dealt with them, you need to flip the switch on the highest platform. Jump from one platform to a higher one, and repeat this until you get to the switch. This will take some practice (tip: try to not bump against sharp angles). Once you flip the switch, you will be able to escape this room.

Return to the room with the structure and take the door to the west. In the room, take the tunnel and turn left, so you can see a door requiring red key. Behind is a switch. After you flip it, the top west portion of the level will be rendered reachable. Go into that room (left of the entrance to the main building). Enter the structure and kill the chaingunner. Flip the switch and prepare for two traps, one of which having the exit door.

A plasma gun (Thing 227) and a BFG9000 (thing 226) are flagged to appear in multiplayer mode but have not been given any skill flags, so they are never spawned in the game.

* In erkaknee.wad the count of radiation shielding suits is 4.