MAP02: The Sink (Whispers of Satan)

MAP02: The Sink is the second map of Whispers of Satan. It was designed by Kristian Aro, and uses the music track "Gun Fighter" by Paul Corfiatis. 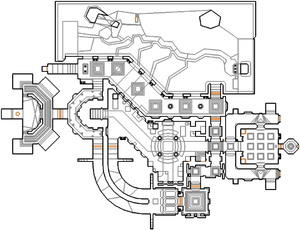 Map of The Sink
Letters in italics refer to marked spots on the map. Sector, thing, and linedef numbers in boldface are secrets which count toward the end-of-level tally.

There are two doors to take, one in front of you and one to your right. Take the door to your right, and follow it all the way to the next door into a large hallway. Open the door to the north instead of taking the hallway to wind up in an outside area. Head down the field here and through the rocks to a switch that has a red bar next to it. Flip the switch and head back into the large hallway, then go west all the way until you reach the red keycard. Go south, into the C-shaped hallway, and go all the way through it and open the next door here to find a canal. Go all the way through this canal till you see a door. This door leads back to the starting point. Ignore it and take the other path in the canal until you reach a red door. Open it to find a large cargo room with a nukage canal running through it. Head for the northeastern part of this area near the blue bars to find the blue keycard, and then press the blue switch next to the bars to open them. Go through them into the next area with a nukage pit dead ahead along with the exit door, and two paths branching off to the sides. Take the left path first and press the switch here, this will open up several monster closets as well as the switch on the right path. Press the switch on the right path to raise some blocks in the pit so you can access the exit.

In the C-shaped hallway on the west side of the map, there is a door in the middle of the hall that leads to a chaingun. If you pick it up, be careful of an ambush from five different sides of the room.

Linedef 2596 does not have a lower texture and is shown in-game as an HOM.

* The vertex count without the effect of node building is 3120.