MAP02: Theta Base is the second map of Mars War by Nathan Lineback. It uses a MIDI conversion of the tracker module "L.F.F" by Matthew Simmonds (4mat).

In version 3, the red key door has been removed and changed to a door that can be entered without a key. Version 3.01 has modified instruments for the module music to make them "less annoying".

Once you secure the shuttle, your first stop is Theta Base. This is where all the cool tech comes from. They supposedly have developed a plasma rifle that is powered by common energy cells, and you need to get it!

You had many friends at Theta base, your last contact with them was hours ago and there has been no response since. You don't really want to think about what has happened to them, and it won't be any fun searching the base. But you know they had all kinds of goodies stashed away that might help you. 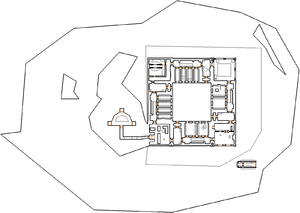 Map of Theta Base
Letters in italics refer to marked spots on the map. Sector, thing, and linedef numbers in boldface are secrets which count toward the end-of-level tally.

Red key card has been removed in version 3 or later.