MAP02: Tower of Hell is the second level of Eternal Doom and was designed by Adam Landefeld. You have left the spaceship and broken through the planet surface. Now you are standing on top of a rocky tower in a huge underground cavern. 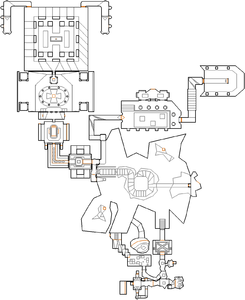 Map of Tower of Hell
Letters in italics refer to marked spots on the map. Sector, thing, and linedef numbers in boldface are secrets which count toward the end-of-level tally.

You start on the top of a black tower. Go down the stairs and cross an invisible bridge flanked by torches. Turn right and go through the door. Take the blue key in the middle of the room and return to the tower. Go across the bridge on the east and ride the elevator up. One of the bricks has an 'X' mark. Press it and come down again. On your way back to the tower, jump to the left (south) of the bridge. There is an opening with stairs in it. Go down the stairs and into a small room surrounded by a walkway. The middle part of this walkway can be lowered to gain access to a brown hallway behind. Follow this hallway and turn right. The red key is at the end.

When you take it, two demons will get out of nearby alcoves and zombies will begin to teleport into the hallway. Go back through the hallway, turn left and then turn around immediately. There is a new hallway there. Go there and hit the switch to disable the blue barrier and gain access to a small room with crates. The crates on the northwest corner of the room can be lowered to access some grey stairs guarded by two sergeants and a Hell knight. At the top there is a stone switch, which activates the invisible stairs flanked by candles. Go up the stairs and through the teleporter on the left (southwest) of the water area to get back on top of the tower.

Go back to where the blue key was and open the red door at the other side of the room. Cross this other room and open the door at the end so you reach another room with imps and sergeants on ledges at your left and right, and a nukage pool with tall walls. These walls can be lowered on the sides. When you get on top of this nukage pool, the walls behind the ledges will lower revealing switches (and cacodemons). Activate them to open a door on the north side of the room. Enter this door to a small room with two more switches. The one on the left (west) lowers the wall revealing an imp and two sergeants. The one on the right (east) opens three "doors" to a courtyard with a statue (which is actually a teleporter) in the middle. Fight the sergeants, imps and cacodemons and then step in the statue to be teleported to the next room.

You are now in a big open room with two "pools" in the middle. At the northeast and northwest ends of this room, there are two doors, which lead to hallways and computers at the end. Kill the enemies in the big room and go through both doors to activate the computers. When you activate the computers the Hell knights in the hallways will teleport to the big room. The two switches also lower the big column between the two pools, revealing a switch, a berserk pack and an invulnerability (along with a couple of revenants). Grab the invulnerability and fight the revenants and Hell knights, then hit the switch. Go back through the teleporter, which will take you back behind the door of the blue key room.

There should be a broken window in the room. Go through it and step into an invisible bridge flanked by candles, with two Hell knights in it. Once you kill them, turn right around the corner, shoot at the wall at the end of the bridge, and go through the opening (there is a baron of Hell here). Follow the hallway killing the imps and sergeants and open the door at the end. You are now in a big room with a nukage pool in the middle. Go up the stairs to the left. Three arachnotrons will emerge from the nukage. Kill them, and kill the imps. There is a room on the north. To remove the barrier, shoot at the "smiley" switch through either window. Enter the room and grab the yellow key that lies on the left computer. Step out of the room and proceed through the yellow door in the east. Go up the stairs, killing two cacodemons around the corner. Open the last door, fight the baron of Hell and press the exit switch.

* The vertex count without the effect of node building is 2512.