MAP02: Town, given the name of Tarnhill in the game's instruction manual and promotional materials, is the area in Strife where the game begins. It uses the music track "Tavern".

At the beginning, you are interrogated by acolytes. You must punch your way out. Next, you will meet Rowan who gives you a chance to do a task. He wants you to go to the Sanctuary to kill Beldin who is about to reveal the location of the Front. After doing so, you bring Beldin's ring back as proof and Rowan tells you about the Front and gives you the com link.

In the town, there is a passage to the Sanctuary and a pub where you can talk to the barkeep. If you have gold, you can get additional information from him in exchange for five coins. There are peasants wandering around the town, too. There is a medical shop along with a weapons and armor shop. Later in the game, you can go to Irale's black market to get an assault rifle and also assemble the flamethrower when you get the pieces. You can go to Norwall prison or Tarnhill power station after a certain point in the game. The Front has planted their base below the broken down city hall. You must go there after killing Beldin. Governor Mourel's mansion is located in the town, too. After meeting up with the Front, you can talk to the governor and he will give you two choices of what to do. 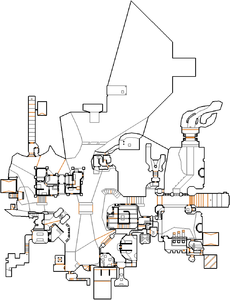 Map of Town
Letters in italics refer to marked spots on the map. Sector, thing, and linedef numbers in boldface are secrets.

While in the town, avoid using any weapons other than the punch dagger. Firing weapons will sound the alarm and cause a flood of aggressive acolytes to teleport into town, making your death almost certain.

You begin in a sewage plant facing an acolyte (or two on the Elite or Bloodbath skill levels). Kill them using the punch dagger, then grab the items in the room and head west to the wooden door. Open the door and kill the acolyte guarding it, then follow the path and turn left into a room where you will find Rowan. Talk to him and accept his task to kill Beldin in the sanctuary; you will be given a crossbow to help you.

Leave the room and turn left, then left again to get outside. Turn left and head down two flights of stairs, then turn right to see the sanctuary in front of you. Drop into the water and head north to step on a small pier, then go into the doorway ahead. Take the med patch among the wooden barrels, then follow the stairs up and turn left to enter the sanctuary.

After getting Beldin's ring and leaving the sanctuary, retrace your steps to the sewage plant and talk to Rowan again, who will reward you with 50 gold and a communicator. Leave the room to receive your first communication from BlackBird, who will act as your guide through the rest of the game. Leave the sewage plant and head down the two staircases again, but this time head across the bridge spanning the river.

Follow BlackBird's directions and go into the destroyed town hall ahead, then follow the doors until you find a room guarded by Geoff. Give him BlackBird's password and he will open the west wall for you. Go through, press the button to lower a staircase and follow it down to the Front's base.

After speaking to Macil and getting your first mission, leave the Front base and head out of the town hall. Go back across the bridge, then turn right and head towards Governor Mourel's mansion. At the mansion, open the front door to go inside, then turn right and press the button next to the silver lift to lower it. Ride the lift up and follow the path to Mourel's office. Speak with him and he will ask you to choose one of two chores, "messy" or "bloody".

If you choose the bloody chore, Mourel will ask you to kill a lackey named Derwin working in the power station and bring back his ear as proof; you will also be given a pass card to access the station. Leave the mansion and go back across the bridge to the north side of town, then turn right and head through the tunnel between the shops. On the other side of the tunnel, turn left to see the power station ahead of you. Head there and open the door, then go north to enter the station.

If you choose the messy chore, Mourel will claim that one of his minions is stealing power and task you with shutting off their supply. BlackBird tells you to find MacGuffin and suggests he can be found in the sewage plant. Leave the mansion and climb the stairs up to the plant and go through its entrance; immediately turn left and head down the stairs to find MacGuffin. Talk to him and he will allow you to ask one question about the power tap; your question dictates how much help he provides. In any case, press the switch in the room to lower the sewage pool and then run south-east across the sewage to find a green wall. Open it to find a power coupling in the room ahead.

You have two options at this point:

Once you have either the ear or the power coupling, return to Mourel and give him the item; you will be given a prison pass in exchange (at this point, you can kill Mourel stealthily to loot 50 gold from his body). Leave the mansion, go across the bridge and climb up the stairs straight ahead. You will see the entrance to the prison ahead; unlock the door and proceed ahead.

After freeing the prisoners and returning to Macil, he will task you with destroying the power crystal deep inside the power station (if you completed Mourel's bloody chore then you will have gone there once already). Leave the Front base to return to town, then head out of the town hall and head north through the tunnel between the shops. On the other side of the tunnel, turn left to see the door to the power station. Open this door and head north.

Once the power crystal is destroyed and you have returned to town from the power station, BlackBird will give you your next mission: to destroy the mechanism controlling the castle gates. You will also be directed to visit Irale and the town's medic for accuracy and stamina upgrades; do so immediately.

Return to the bridge but do not cross it. Instead, head south past the town hall until you see a room on the right. Go in here and throw the switch under the display screen to open the nearby door. Behind the door, throw the switch on the west wall and then jump down the open hatch to reach the sewers.

Once the castle's gate mechanism is destroyed and you have returned to town from the sewers, go back to the Front base to receive your next mission from Macil: to assault the castle and eliminate the Programmer. After leaving the base, head out of the town hall and go across the bridge, then climb up two flights of stairs. At the top, head straight forward along the red walkway towards the large doorway ahead. Go through and climb the stairs to reach the castle.

Once the Programmer is dead and the castle is captured by the Front, you will be instructed to head to the borderlands to seek out the Oracle. Leave the castle and return to town; after going down the stairs and through the castle gate, you will see some bars lowering on your right. Go through these bars and head forward to the gate out of town.

West of the sewage plant is a tavern. You can speak to the barman inside to get information about the Order in exchange for gold. You can also find Harris in an upstairs room, who asks you to collect an offering chalice from the sanctuary in exchange for "more gold than you could ever spend". If you accept his quest and then kill him stealthily, a button will be revealed behind him; press it to lower a staircase leading to a hidden room containing two piles of 50 gold, a targeter, a surgery kit and poison bolts.

Three shops can be found in the north-west area of town: a medic who sells healing items, an armorer who sells armor and environmental suits, and a weaponsmith who sells ammo. After starting Macil's first mission, you can also find Irale through a door behind the weaponsmith's shop - he sells assault rifles and bullets for this weapon. Irale can also make you a flamethrower once you have received the necessary parts from Weran.

After the Programmer is killed, you can return to the Front's now-abandoned base to collect extra items if you wish.

When looking toward the south end of the river and the tavern from near the exit from the Sanctuary, a drawsegs overflow can occur, causing either the inside of the tavern or the far wall above the river to become a hall of mirrors effect.

A water bottle (thing 78) and a multiplayer grenade launcher (thing 123) have no flags set for any of the three difficulty classes, so they do not actually appear in the level. A teleport destination (thing 578) does not have skill flags either, but because of special handling in the engine, it functions normally in the level.

* The vertex count without the effect of node building is 2875. 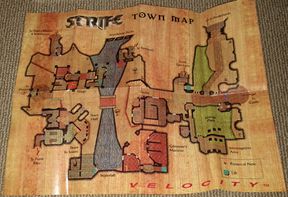