MAP02: Tunnel Town is the second map of Hacx. It was designed by Stephen Watson and uses the music track "". 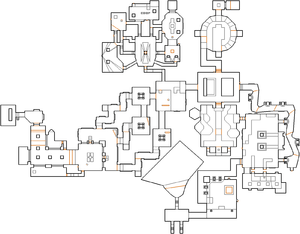 Map of Tunnel Town
Letters in italics refer to marked spots on the map. Sector, thing, and linedef numbers in boldface are secrets which count toward the end-of-level tally.

There is door up ahead. Open it and walk through the laser sensor. Go though the corner up ahead until you are in a room with two locked doors and a small gray box on the floor. The box has a switch on one of its faces.

Travel through either one and you'll end up on a platform surrounded by water, with another platform beyond your reach. There is a switch in front of you. Activate it to raise a bridge for gaining access to other platform.

Cross this bridge and go through the passageway. Turn right and go in this direction until you see a door on your right. Open it to enter the room with the KeyCard.

To get the KeyCard, go over the bridge. There are two lifts on both sides. Take one and and go up onto the small corridor. From there, continue, until you see the KeyCard stand. Take it and exit this room.

Now turn right and go in this direction to get to the locked door. Open it with the KeyCard and enter. Go through the winding passageway until there is a hand scanner in front of you, along with an "Android capsule". Press the hand scnner.

Now go into the Android capsule, where you'll see that the back wall has opened to reveal a new room resembling an Android production factory.

In this room, there is a locked door, protected by a Password and an entrance to a smaller room. Go into this room and collect the Password. Now open the locked door here.

There is another winding tunnel here, go through it until you are in a room surrounded by pillars and an inaccessible ledge. Go onto the middle of this room, and you'll see a switch on a part of a brick wall. Shoot this switch and an elevator will rise behind you. Once it has gone all the way up, press use to bring it down to your level and get on it.

Once the elevator rises, you'll see another shootable switch. Fire at it and jump off the elevator. You'll notice that a few steps have risen up to allow access to the inaccessible ledge.

Get on that ledge and walk through the tunnel on your right. There are three entrances here: two on the left wall and one at the right wall. Enter through the entrance on the right and run up the flight of steps.

You will now see a raft on a sea in front of you. Run towards the raft to exit the level.

* The vertex count without the effect of node building is 1818.