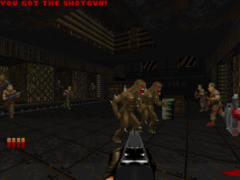 MAP02: UAC in Exile is the second map of UAC Ultra. It uses a music track from Abuse. 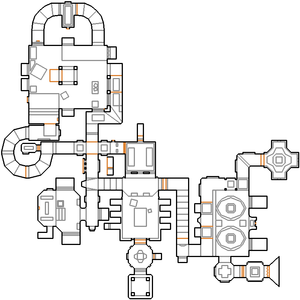 Map of UAC in Exile
Letters in italics refer to marked spots on the map. Sector, thing, and linedef numbers in boldface are secrets which count toward the end-of-level tally.

If you are playing on Hey, Not Too Rough or lower, there will be a shotgun in front of you, otherwise, get secret #1 for one. There will be a few enemies to kill in the next room. East is a blue door, so head west and at the next fork, turn left and follow the hall to a room with a chaingun and armor. The switch here opens up some walls with former humans behind them, plus a Hell knight just in the hallway. Return to the hallway to find the door on the other side open. Follow this path, killing demons that appear just at a lift that rises, then take this lift down into a loading area with several crates. You will want to reach the lift where the chaingunner is, so do that and jump to the platform to the north. Head through the next hall, up the steps and through the next door, killing demons inside. Hit the switch and continue until you reach the next switch. Return to the room after hitting it, and get rid of any imps you see outside. Jump to the southwest to reach the next switch, which opens a wall with a couple of Hell knights inside (plus a chaingunner on Ultra-Violence or higher). Use the switch, ride the lift up, and follow the path. When you reach a dead end, flip the switch to reveal an arch-vile (or revenant on Hey, Not Too Rough or lower), which will teleport to the south. You will see the blue key behind you.

Drop down after getting the key, and then use the blue door. Follow the hall until you reach the next big room. When you drop down, you will find a switch dead ahead. Hit it and get rid of the revenants (Hell knights on Hey, Not Too Rough or lower) that appear, then head north. A few enemies guard the red key. After picking it up, head back south and find the red door at the southern end of the room. There will be a pain elemental (or three lost souls) guarding the exit.

* The vertex count without the effect of node building is 1287.

This map features half-and-half development. The first half of the map was created by Super Jamie. Everything beyond the blue keycard door was created by Jon Vail. This is Jon Vail's personal favorite map of the UAC Ultra episode.