MAP02: Underhalls is the second map of Doom II. It was designed by American McGee and uses the music track "The Healer Stalks". The par time is 1:30. The level introduces two new things to the world of Doom – fast doors and the super shotgun. Also, on Hurt me plenty and higher, the demon returns from the original Doom. 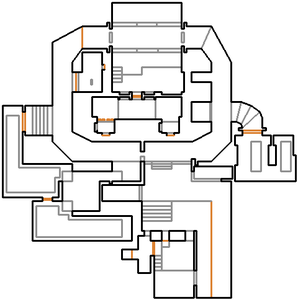 Travel across the river and go up the stairs. Open the door. Turn left in the small corridor and press the switch near its end. Return to the entrance room where a barricade to the east has lowered. Follow the tunnel until you reach a room with a house and an opening to the sky. Take the walkway to the end where there is an opening in the house. Use the run key to jump over the gap into the house. Climb the stairs, pick up the red keycard and make another return to the entrance room.

Go through the door that was entered before. Proceed to the other end of the corridor where there are red key bars. Open them and press the switch to lower the western blockade. As you explore the new tunnel, take the second branch to the right where there is a passageway, a barrel and a sergeant stuck in the wall.

Enter a room with two holes in the floor. Take the southwestern one. You will find yourself in a dark passage with a lot of barrels so watch your shots. Pick up the blue keycard in one end and go through the door in the other to proceed to a similar passage. Find your way to the blue door, open it and go up the stairs. There is another blue door approximately opposite. Enter it and press the exit switch.

In the eastern tunnel, there is a fork to a UAC door. The computer room beyond holds an unprecedented weapon – the super shotgun.

Secret exit [Xbox only]: After obtaining the red keycard, drop down and enter the northeastern chamber that has opened. Walk up to the narrow stone wall in the northwest corner of the chamber and press on it to be taken to the Xbox-exclusive secret level, MAP33: Betray.

There is a blind sergeant (thing 8) in the room behind the first door near the start of the map.

Behind the bars locked with the red key, sector 39 (the alcove of the western monitor) is not "closed" because linedef 312 (the southern border of the sector) originates along the body of linedef 491 (an adjacent wall southeast of the sector) rather than its endpoint. It results in a paper-thin wall at the southern end of the monitor.

At the southern end of the western tunnel, there is a sergeant (85) that is immobile due to being partially inside the southern wall. He may be gibbed freely by the barrel next to him. Similarly, the center of a barrel (69) in the northern dark passage has been placed into a wall, which causes problems in rendering; despite being exposed by half, the barrel is invisible from most angles.

The lower sides of linedefs 327, 328, 338 and 339 are all untextured, producing Hall of mirrors effects. They form the short steps on the bottom of the two holes near the blue keycard.

The map used to feature a set of bars in sector 22 blocking the way to the sleeping sergeant. Apparently it wasn't very obvious these bars were doors or there was an attempt at correcting the sleep sergeant bug and the bars were removed in later versions of the game. The area still has some extra linedefs (519, 521 and 522) that serve no real purpose, and are unnoticeable in game due to the texture alignment masking their existence.

Near the start of the map there are two pillars that can be lowered down to the surrounding water, hiding their existence once lowered. These already have FWATER1 as their floor texture, most likely due to the game not having any S1 linedef type to lower a floor and change texture. This is clearly visible if the player moves out quickly when a pillar is lowering.

It is possible to skip the obtaining of the red keycard. The circular corridor with water on its floor is divided by two columns in the southern part. One of the mentioned columns disappears after activating the switch besides the red pillars. The hole between the columns is wide enough to get through if you perform a guideless glide.

The official French name of this level is Halls souterrains.