MAP02: Virgil is the second map of PlayStation Final Doom. It is a console version of VIRGIL.WAD which was originally designed by John Anderson. Changes for the PlayStation port were authored by Tim Heydelaar.[1] It uses the music track "Vexation". Like in the PC version the black star sky is used in this level.

It is known as Virgil's Lead in Master Levels for Doom II. 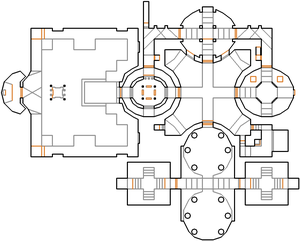 Map of Virgil
Letters in italics refer to marked spots on the map. Sector, thing, and linedef numbers in boldface are secrets which count toward the end-of-level tally.

In the starting area, pick up the shotgun in front of you, then go down the east staircase and press use on the wall with the baron texture in front of you to reveal a door. Open it and walk through to a marble hall with columns. Climb the stairs and open the door at the north end, then walk through it to an outdoor courtyard. Go straight ahead and open the north door to a room with four staircases and a chaingun. Go west through another door to a hallway, and follow it round to another locked door. When you reach this door, look at the east wall and press use on the section of wall with a cross-shaped brown texture to reveal a switch. Press the switch and go back to the previous room, where a platform holding the yellow skull key has lowered.

After taking the yellow key, leave the room through the east door and follow the hallway round to another door locked with the yellow key. Open this door and you will find a round room with a chainsaw. Press the switch on the east wall, take the computer area map in the south-east corner of the room and leave through the west door to return to the courtyard. Go to the south-west corner and you will see a small door has opened to reveal a teleporter. Step on the teleporter and it will take you to a marble room similar to the starting area. Kill the shotgun guy in front of you and take the blue skull key lying next to the south wall.

Once you have the blue key, go down the west staircase and press use on the wall with the baron texture in front of you to reveal a door. Go through this door to return to the marble hall with columns, then head through the north door to return to the courtyard. Go through the west door (locked with the blue key) to find another round room. Go round to the north side of the room and walk up to the bars which will lower automatically to let you pass. Press any of the switches in the middle of the room to lower the columns, kill the Hell knight and take the red skull key.

Once you pick up the red key, wait for the columns to rise again and you will see that the switch west of you is in the on position. Press it to open the west door out of the room, then any of the other switches to lower the columns and let yourself out. Walk through the west door you just opened to reach a large outdoor area with a blood pool. Follow the walkways around the edge of the pool until you reach a switch, and press it to lower an elevator which will take you to the west side of the room.

The marble face on the west wall is a door locked with the red key - open it and approach the tall green firesticks in front of you, which will cause a switch to rise from the floor. Press this switch to temporarily lower the bars blocking the exit teleporter, then turn around and run to the teleporter to finish the level.

In the starting room, press use on the baron texture on the west wall to reveal an alcove containing armor and a medikit.

In the central courtyard, open the door in the south-west corner to reveal a rock tunnel. Opposite a hanging corpse you will see a metal pillar - press use on it to reveal a soulsphere, and open an alcove containing a spectre and imp. This alcove also contains a backpack, megaarmor and one box of rockets.

In the hallway connecting the north and east round rooms, look at the west wall and you will see a section of wall with a cross-shaped brown texture, when reveals a switch when opened. Press this switch and kill the imp which tries to ambush you from your right, collect the megasphere behind it (HMP and UV only) and press another switch. Return to the north room to find that a platform has lowered, holding partial invisibility and a box of ammo.

In the room with the blue skull key, press use on the baron texture on the east wall to reveal an alcove containing a plasma gun, energy cell and berserk.

* The vertex count without the effect of node building is 897.