MAP02: Waste Processing is the second map of Simplicity. It was designed by Melissa McGee (Agent Spork) and uses the music track "On the Hunt", originally created by Robert Prince for Doom. The par time defined in MAPINFO is 3:00. 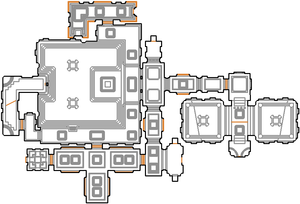 You start in a large T-junction. Take the shotgun and use it to Kill the zombiemen and imps ahead, then open the north door to enter a large hall with a nukage pit - there are zombiemen, shotgun guys and imps on the walkway, and on Hurt Me Plenty skill level there will also be lost souls and cacodemons above the pit. Head west through an archway and open the door here, then follow the hallway north past a couple of imps and chaingunners to find a button guarded by (depending on skill level), a demon, a Hell knight or two revenants. Pressing the button will raise a bridge on the east side of the pit - go round to that bridge and kill the enemies that have appeared there, then head north through another door and kill a couple of shotgun guys before pressing a button on the east wall. Now follow the passage west and south to find a couple of chaingunners guarding the blue keycard.

Return to the starting area and open the east door - you will see one or two chaingunners ahead through a window, and two or three spectres will approach from your left. Follow the corridor north to a junction and turn right, kill some imps then head east to a door and open it to confront an imp and one or two shotgun guys. Head south across a bridge and press a button on the other side - the button activates a trap that triggers when you go back across the bridge, raising some bars to block your path and spawning two cacodemons (four on Ultra-Violence and Nightmare) from the nukage pools on either side. Kill the cacodemons to lower the bars, then head back to the junction and proceed north to a teleporter; after entering it, press the button to your left to lower a monitor wall and reveal the red keycard. With this key, kill the shotgun guys, imps and revenants that teleport in through the window then retrace your steps to the starting point and open the west door to find two chaingunners protecting the exit switch.

A chaingun and two boxes of bullets can be found in the large nukage pit.

* The vertex count without the effect of node building is 2932.