MAP02: Wet Works is the second map of the Newdoom Community Project. It was designed by Andy Mckie (Mystic). 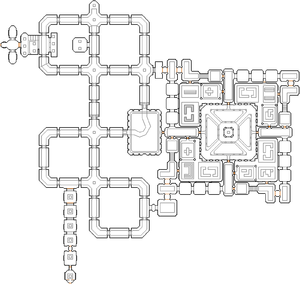 Map of Wet Works
Letters in italics refer to marked spots on the map. Sector, thing, and linedef numbers in boldface are secrets which count toward the end-of-level tally.

Go to the room that is directly left and up the stairs from where you start. Press the switch there. Now go explore the water works, but your main destination is towards the east, where bars should be open into a computer network of sorts on the eastern part of the map. This place is radially symmetrical so you can explore and get certain supplies such as a rocket launcher and a plasma gun by jumping on crates. If you want to simply go through the level, from the entrance to this area, go east until you cannot go east anymore. Take the lift south here and instead of taking the stairs, take the door and press the switch that is on the north wall here. This opens several places, including the map's secret. Several bars back in the water works are also open, as well as the exit in the southwest portion of the map. Go here when you are ready to leave and fight monsters until the you reach the exit.

* The vertex count without the effect of node building is 3594.