MAP02 is the second map of 2 Sectors. It was designed by Brandon Bannerman (Catsy). 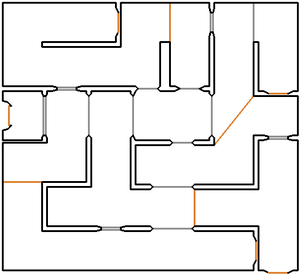 This level is a maze with one to three arch-viles in the middle - they cannot escape their cage so killing them is not a priority, but be prepared to hide from their attacks. Step forward to collect a shotgun and armor (the armor will be placed between two shotgun guys on Ultra-Violence (UV) and Nightmare (NM) skill level) then turn round and follow the passage past some shotgun guys and demons to a satyr switch. Press the switch then turn round and look through the door that has opened on your right; kill the imps and zombies you can see through it then go straight forward to collect the red skull key.

Go back to the door but do not walk through it; instead, head east to a T-junction then turn right and kill two shotgun guys guarding a gargoyle switch, which will open another door behind you. Kill the zombie waiting behind the door then go through it and turn left to find a chaingunner guarding the yellow skull key. Take this key then turn round and follow the passage north past some imps (a door will close on your left) until you reach a lion switch guarded by two more imps. Press the switch to open the door you just passed, step through it then turn left to find the blue skull key being guarded by a shotgun guy.

Follow the passage west (the door behind you will close again) until you reach a plasma gun, then use it to kill a baron of Hell guarding a satyr switch. Press the switch to open a door leading back to the start point, as well as another door next to it revealing a demon (or Hell knight on UV and NM) guarding a computer skull switch. Kill the monster then press this switch to finish the level.

* The vertex count without the effect of node building is 169.