MAP02 is the second map of 99 Ways to Die. It was designed by Warren Marshall. 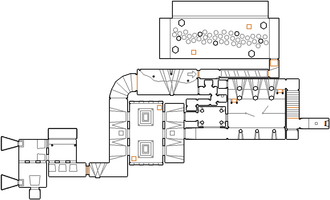 Jump out the window to the yard outside, then take the northern teleporter. Head east to another outdoor area. Go behind the fence, take the lift to an upper level and then another to the top. At the top, head down the eastern passage to find the exit switch.

Similarly to MAP01, this level has several optional areas:

* The vertex count without the effect of node building is 1456.