MAP02 is the second level of Brotherhood of Ruin. It was designed by Kristian Aro and uses the music track Roma3 from the Hexen II map "Demetrius' Baths" composed by Kevin Schilder. 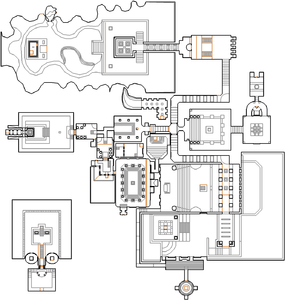 Head northward into a room with a super shotgun. The switch here releases Hell knights and opens the western door in the starting room. Go through here and go left at the fork. As you go, look out for the crushers in the center of the hallway, as well as the imp ambush that happens as you head midway through it. Head into the courtyard with the ziggurat containing several chaingunners. Go up this structure, and there is a column in the middle with two switches on the east and west sides. Press the switch on the west side (this will open up the door back at the fork) as the other switch releases four chaingunners around you. If you want a rocket launcher, head south into a small hallway and pick it up, but be careful as barons of Hell will attack once you get it. Now head back to the fork and take the western door into a chamber with water. Go in, and go straight at the fork. Follow the linear path until it dead-ends at a switch, and pressing it releases a cacodemon next to you and another passage a bit behind you. In this room, a berserk pack is resting on a pedestal, but you cannot reach it yet. Take the northeastern path to a teleporter, and then press the switch at the very end of that path. Go back to the room with the berserk, and there should be a room to the southwest open. Press the left switch to release the berserk pack, and press the right switch too. Now return to the water-filled fork and go west. You should have opened a door leading to a square pyramid outside, and inside this pyramid is a teleporter to a different area. Cross the bridge and grab the yellow skull key in this chamber, watching out for two Hell knights that teleport in when you grab it. Backtrack all the way to the first fork and head north. Cross the bridges, being wary as three heavy weapon dudes and two revenants appear behind you when you reach the other side. Press the switch (it is an unmarked yellow key switch) and go through the hallway picking up another rocket launcher before climbing the stairs outside. Out here, if you attempt to go down the stairs, revenants will flank you. Hit the lift next to the building and enter the teleporter inside, then exit.

* The vertex count without the effect of node building is 3784.