MAP02 is the second map of Dystopia 3. It was designed by Anthony "Adelusion" Czerwonka and Iikka "Fingers" Keränen and uses the music track "Intermission from DOOM". 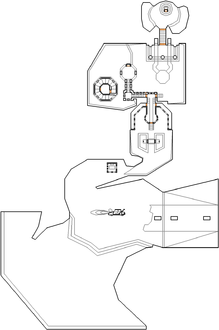 Get out of the car wreck and kill the shotgun guys and zombieman around you. A lost soul (Hey, not too rough and below), a cacodemon (Hurt me plenty) or two cacodemons (Ultra-Violence and above) will soon approach from the east, so deal with them.

Continue forward to the entrance to a large brick keep. Use your shotgun for the imps on the ground and the chaingun for the shotgun guys on the walkway to the north. Head up the steps, open the door and back off to provide some stand-off against the cacodemon (Hey, not too rough and below) or Hell knight (Hurt me plenty and above). Kill it and continue into the castle, being wary of shotgun guys on the nearby ledges.

Head back down to the hallway and take the blue door to enter into the courtyard. See if you can get the arachnotrons at the far end to take care of the imps for you. With some deft movement, you can go around them and open the door in the north, luring up to four cacodemons out of the area ahead. With some luck, the arachnotrons and cacodemons will infight, and you can save yourself plenty of ammo.

Continue forward down the steps and into the cave. Grab the backpack and flip the switch behind it. Suddenly, the walls nearby will open, revealing up to eight arachnotrons. If you just want to survive, backpedal out of there fast. However, if you want all the kills, go around the alcove with the switch and collect an invulnerability and two boxes of shells, then go to town on the arachnotrons.

head into the red brick building from its southeast side. Climb the stairs and mow down the former humans, then open the door at the top. Your final opposition is a cacodemon (Hey, not too rough and below), a Hell knight (Hurt me plenty) or a Hell knight and a baron of Hell (Ultra-Violence and above). Flip the switch in this room to exit the level.

At the beginning of the level, there is a broken stretch of elevated highway (running east west) that crosses a fence (going north-south). This is accomplished in a far simpler manner than expected.

While this means that the "highway" does not actually have a real road on top of it, the player will never be in a position to notice this during normal gameplay.