MAP03: 6 Sector Tea Jug is the third map in the DMP2013L.wad mapset of the Doomworld Mega Project 2013. It was designed by Olivia Riley (Getsu Fune) (credited as Hurricyclone) and uses the music track "Donna to the Rescue," originally composed by Robert Prince for Doom. The map was originally submitted under the name 6 Sectors Under the Sea, which was later changed.

This surreal map is made up mostly of featureless, curving cave corridors with a watery ceiling, with numerous very thin, walk-through green pillars scattered throughout. True to its name, the level is composed of only six sectors. 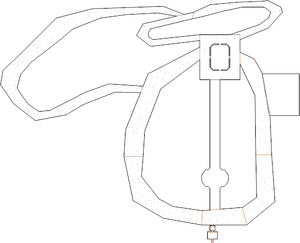 Map of 6 Sector Tea Jug
Letters in italics refer to marked spots on the map. Sector, thing, and linedef numbers in boldface are secrets which count toward the end-of-level tally.

You need to pick up: the blue key (in a room to the east, hidden behind a wall of walk-through pillars), red key (directly to the south of the starting room), and the yellow key (in the middle of the curving corridor to the north, accessible through the north-eastern and north-western doors in the starting room). Once you have the keys, simply head through the exit door to the south, and make your way to the exit switch.

A large number of multiplayer-only things have no flags set for any of the three difficulty classes, so they do not actually appear in the level:

Four deathmatch starts (things 359, 360, 361 and 362) also have no flags set for any of the three difficulty classes, but because of special handling in the engine, they function normally in the level.