MAP03: Administration is the third map of Project Einherjar. It was designed by Mike MacDee (Impie) and uses the music track "". 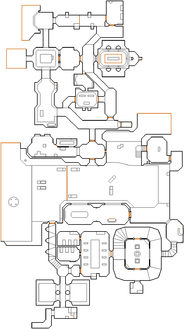 Map of Administration
Letters in italics refer to marked spots on the map. Sector, thing, and linedef numbers in boldface are secrets which count toward the end-of-level tally.

The map is divided into three blocks: the laboratory block, the outdoor block, and the office block. Juno starts in the lab block with a squad of Fratboys and a handful of Mommybots. At the forked hall, the right path leads through an office (containing ammo and health) to the red door, which protects the blue key. Stock up on ammo and other goodies, then take the left path to the outdoor block.

The outdoor block contains a small army of Fratboys and Stepchildren led by a couple of Amazons; partway down the street you'll trigger a trap that opens the two truck trailers and spills Juggernauts into the street. The second-floor meeting room -- visible through the glass windows -- has a Valkyrie Captain; kill her and take her red key. You can retrieve the blue key from the red lab, or do a combat sweep of the office block first and collect the items therein -- it is heavily populated with enemies, so the stealth approach is recommended.

Activate the switch between the blue doors to access the conference room and fight Maxie Vargstein for the yellow key. It unlocks the way to the exit near the office block entrance.

The first Vargstein Sister ambushes you in the conference room. It's best to clear out her minions before entering the room and triggering the fight. There is plenty of cover to use against her attacks, but reaching said cover can be difficult. Maxie drops the yellow key when killed; you can activate the conference room door switch behind her ambush hole anytime, but doing so while Maxie is alive guarantees you'll get shot in the back.

The crate hallway on the north side of the office block is a trap: the crates lower to reveal ambush closets filled with Amazons.