MAP03: Aegritudo is the third map of Counterattack. It was designed by Brett Harrell (Mechadon) and uses the music track from MAP11 of Crucified Dreams, composed by Nicklas Linnes. 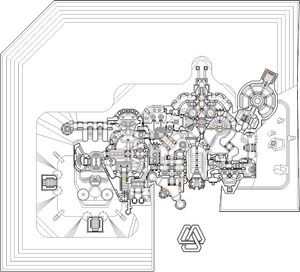 Map of Aegritudo
Letters in italics refer to marked spots on the map. Sector, thing, and linedef numbers in boldface are secrets which count toward the end-of-level tally.

The lift mentioned in Secret #3 and #4 has three linedefs for lowering it. However, these linedefs are only usable once, meaning the lift can only be lowered three times. This means that if you are at the bottom of the lift after using it three times, and the other wall (the one that lowers from the shootable switch mentioned in Secret #3) closes while you are in it, it is possible to be stuck in sector 2925 with no way out.

* The vertex count without the effect of node building is 17428.