MAP03: Alleys of Rheingold is the third map of Midgard Outlaw. It was designed by Mike MacDee (Impie) and uses the music track "". 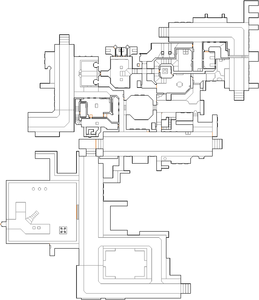 Map of Alleys of Rheingold
Letters in italics refer to marked spots on the map. Sector, thing, and linedef numbers in boldface are secrets which count toward the end-of-level tally.

Juno discovers she has been framed as Drogo's accomplice by Commander Dawn, Drogo's real accomplice, and must fight her way to the Midgard Embassy to seek sanctuary.

MAP03 is large and nonlinear, but you are mainly restricted to cramped alleyways and building interiors. The map centers around a large hotel where many of Drogo's goons have shacked up.

Enter the hotel via the alley door and secure the leisure room, the lobby, and the suite upstairs where you will find extra armor. Jump out the suite window and into the room across the alley: here you'll find another window and a walkable ledge, and a winding hallway leading to the bridge to the red key.

The red key gets you into the medical labs where questionable research is being conducted. Kill the Vampire Matron to get her blue key and take it to the small gatehouse with the blue switch: it opens the hotel storeroom door where the yellow key is stored (and also several ambush closets). Use the yellow key to enter the hotel office, and hit the switch to open the green gate. Beyond the gate is the city streets, leading to a tank yard and the exit switch.

Once you set foot on the city streets, you're assaulted by the first of several massive tanks armed with a variety of missile weapons: it fires regular and heat-seeking missiles, and clusters of drunk missiles. Once you open the army base gate, two more tanks will emerge for the final battle: destroy all tanks on the map to raise the stairs to the exit switch.

Be wary of retreating into alleys to escape a tank, as it may manage to squeeze itself in and trap you. Also beware its explosive death sequence.

The hospital stairwell leads to a small security office with a Dessler frag cannon.