MAP03: Arachnotron Arrival is the third map of Ancient Aliens. It was designed by Paul DeBruyne (skillsaw) and uses the music track "Depth Charge," composed by Stuart Rynn (stewboy). The par time is 3:15. 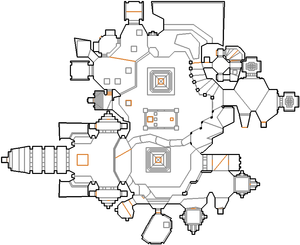 Map of Arachnotron Arrival
Letters in italics refer to marked spots on the map. Sector, thing, and linedef numbers in boldface are secrets which count toward the end-of-level tally.

You start in a room with an ominous warning about the arachnotrons in the level, so ignore them as you progress. The exit is blocked by a lone zombieman, so kill him and get out. To the left is a shotgun and combat armor, which causes two imps to spawn in. To the right is an elevator with more imps behind it. Take the elevator up and deal with the imps, shotgunners, and the demons in the room. Press the switch on the south wall to let two revenants out, with chaingunners in the space behind them. Punch out the revenants with the berserk given to you, and then hit another switch in the room to the east to reveal a teleporter out of the area.

This takes you to a balcony in full view of an arachnotron, and moving off the teleport destination will reveal shotgunners to your left and demons to your right. Deal with them while grabbing the rocket launcher and rockets, then press the switches in their closets to reveal even more enemies, including two revenants. Eventually, the back wall will open up with another teleporter back into the central area.

After exiting the closet and pressing the switch, cross the newly formed bridge to the other side and proceed down the hall. Enter the passage and press the switch, killing more imps and a spectre. Pressing the purple face will reveal more enemies, and entering their room will open even more closets. Grab everything, then head back out the way you came in and down the stairs to a room that just opened up.

Press the switch in here and you'll be locked in with two mancubi and more shotgunners. Another switch reveals a teleporter where the first was, so enter it and return back up the stairs to find yourself at the top with a super shotgun on a ledge. Grab it, then drop down and deal with some revenants before releasing more enemies. After killing them, one of the closets will have the blue key. Open the blue door and enter the room to be sent through two spirit sequences that will deal with the arachnotrons once and for all. Then you can exit.