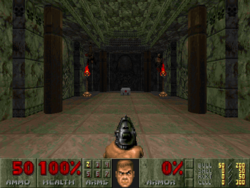 The sealed starting room of Avernus.

MAP03: Avernus is the third level of The Abyss. It was designed by Miklos de Rijk (H2SO4), and uses Heretic window textures. It is a marble temple similar to an ancient Roman avernus, or the Ploutonion at Hierapolis. The noxious red liquid surrounding the temple is poisonous water that damages the player.

This level is completely non-linear, and the temple's two keys may be obtained in any order, but most players will collect the blue key first. 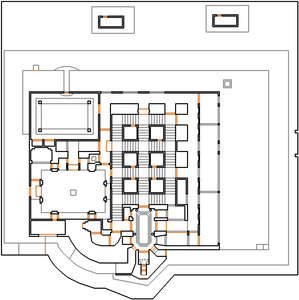 Map of Avernus
Letters in italics refer to marked spots on the map. Sector numbers in boldface are secrets which count toward the end-of-level tally.

Grab the temple's two skull keys, raise the pillars, and make it to the exit. Each key triggers a trap when collected.

The first key to obtain is the blue skull key, guarded by imps, a Hell knight, and an arachnotron on higher skill levels. There is a special room dedicated to this key that is quite easy to find. The second key is located outside, on a pillar that must be lowered. It is also obtainable when hitting the switch in the blue skull key room.

The last quest is to lower the pillars blocking the exit. The switch to lower them is well hidden, and a cacodemon guards the switch at higher skill levels.

Most action will take place in the key room or the stairs room. On source ports with 3D height checking, it may be possible to "jump over" players and take them by surprise from behind.