MAP03: Bioactivity is the third map of 2048 Unleashed. It was designed by Olivia Riley (Getsu Fune) and uses the music track "". 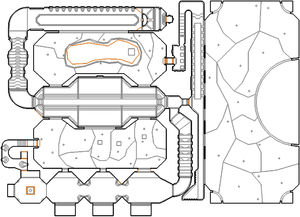 Map of Bioactivity
Letters in italics refer to marked spots on the map. Sector, thing, and linedef numbers in boldface are secrets which count toward the end-of-level tally.

Kill the imps to your left and right (as well as zombiemen on Hurt Me Plenty skill level or higher) then head west until you can go round a corner and climb a set of stairs. Go past the imps at the top of the stairs and head round the next corner to find a passage with an imp and four zombiemen, then go to the end of the passage to find a switch recessed into the wall. Press it then backtrack to the starting point and head east to a silver door requiring the yellow key - just before you reach this door, turn right and climb up another staircase then go round the corner to enter a tan passage with more imps. Head to the end of this passage to find the red keycard sitting on a plinth - approaching it will open several closets along the passage containing zombiemen and imps.

With the red key, go back to the first switch and step through the narrow doorways either side of it to find a shotgun guy guarding another switch which requires the red key. Press it to open a wall behind you then turn round to kill a demon guarding the yellow keycard - pick it up then head back to the starting point (past some imps and zombiemen which teleport in) and head east to the silver door again. Go through the door and turn left then follow the passage past two imps until you go down some steps to a door guarded by a shotgun guy - open this door and collect the radiation shielding suit behind it, then open a second door to find a pit surrounded by nukage. Kill or avoid the cacodemon that appears in front of you and drop into the hole to finish the level.

* The vertex count without the effect of node building is 3061.