MAP03: Cakewalk is the third map of Insertion. It was designed by Stephen Watson and David Shaw (Tolwyn), and uses the music track "Mystic's Glance" by David Shaw. 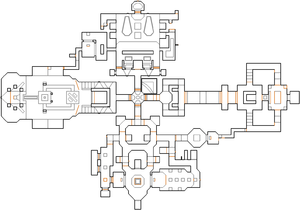 Map of Cakewalk
Letters in italics refer to marked spots on the map. Sector numbers in boldface are secrets which count toward the end-of-level tally.

An armor bonus (Thing 220) in the yellow key room is on a platform that is too high to reach without resorting to cheat codes. Only 97% items is possible on this map.