The authors of the original level were Tim Willits and Theresa Chasar. Changes for the PlayStation port were authored by Tim Heydelaar.[1] 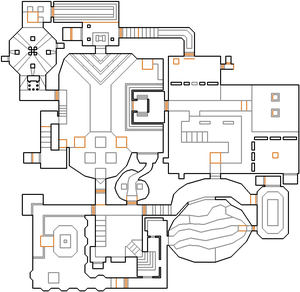 Map of Canyon
Letters in italics refer to marked spots on the map. Sector, thing, and linedef numbers in boldface are secrets which count toward the end-of-level tally.

Once you have the key, go west into the next room then turn left and follow the corridor to a red door. Go through it and head north-west to a lift; take the lift up to the top floor to find the blue keycard on a raised platform.

Step on the lift again and step off onto the western walkway. Follow this walkway north and east through another red door, then immediately go north through a blue door to a large outdoor area. Use the lift in the south-west corner of this area to get into a brick room, then climb two staircases and go through another door into a marble room.

Go north through the marble rooms until you come to a lift, use it to climb up to the next floor and go east through some hallways until you reach a door. Go through this door and up a staircase, which leads to an outdoor area sealed with metal columns. Step on the white teleporter pad in this area and collect the yellow keycard in front of you, then step back on the teleporter and go through the yellow exit door in front of you. Press the switch behind this door to finish the level.