MAP03: Canyon of Chaos is the third map of Disrepair. It was designed by Andrea Rovenski (Cyberdemon531) and uses the music track "Frag Fest" by John Weekley (PRIMEVAL) (from Unholy Realms). The par time defined in MAPINFO is 30 seconds. 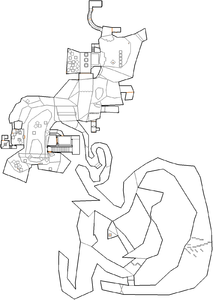 Map of Canyon of Chaos
Letters in italics refer to marked spots on the map. Sector numbers in boldface are secrets which count toward the end-of-level tally.

Enter the UAC building in front of you, travel up the stairs, and along the walkway at the top. Activate the switch hidden behind the silver boxes, and collect the now-lowered red keycard. Traverse the cacodemons and bridge over slime to find the red door. Inside, you'll need to hit five switches (including jumping to the final one) to raise steps to the canyon, and the exit door.

From the starting platform, SR-50 onto the rocky area, using the small box. Avoid the enemies, make your way to the end of the canyon, and run along the small ledge found on the green brick. From there it's a straight run to the exit.

* The vertex count without the effect of node building is 1466.