MAP03: Canyon of the Dead (No Rest for the Living)

MAP03: Canyon of the Dead is the third map of No Rest for the Living. It was designed by Russell Meakim and uses the music track "DOOM". The par time is 2:00. 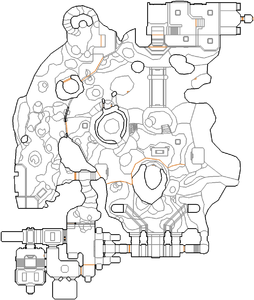 Map of Canyon of the Dead
Letters in italics refer to marked spots on the map. Sector, thing, and linedef numbers in boldface are secrets which count toward the end-of-level tally.

Flip the switch to the right, go through the hall and flip the first switch from the other side. Backtrack to the first hall and take the blue key from the monster closet.

Backtrack through the halls again and open one of the blue doors. The faster way to get through the map is by going through the left blue door, open it up, walk along the cave and turn left. Go through the furthermost nukage river and take the yellow skull on top of the marble ruin.

* The vertex count without the effect of node building is 2967.